The Perito Moreno Glaciar is just one of the many glaciers which flow from the Patagonian Icefield. This Icefield is 13000sq km which makes it the 3rd largest mass of ice in the world after Antarctica and Greenland. The photos below only show the front portion of the 30km long glacier. This photo shows between 6km up the glacier (right hand side), and very roughly 12km up (LHS). 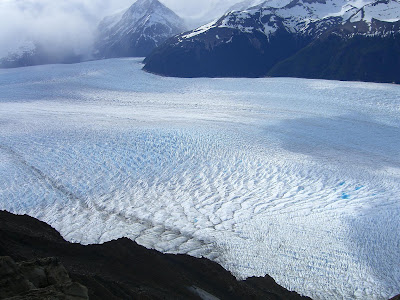 The photo below gives you a good idea of the arrow-like shape of its front. The other photos are all taken from the southern (left) side. 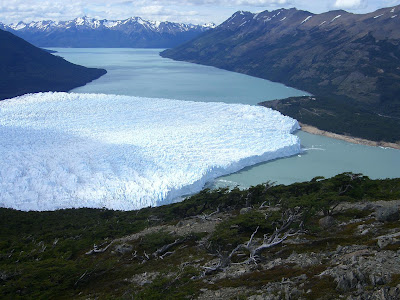 One thing that makes this glacier very exciting to visit is that it is a calving glacier. This means that ice cliffs of up to 70m are formed at the front, and ice chunks are regularly calving and making crashing into the water below. 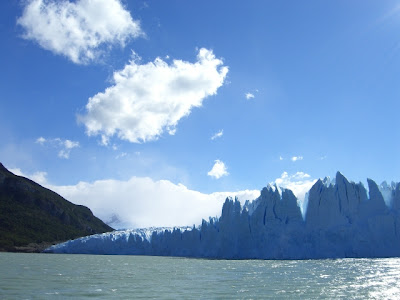 The glacier is not floating, it is supported completely on the bottom of the lake. The incredible thing is that the depth reaches up to 110m. The biggest icebergs that are found floating in the lake detach from underneath and pop up like submarines - they are not broken by the impact of falling. 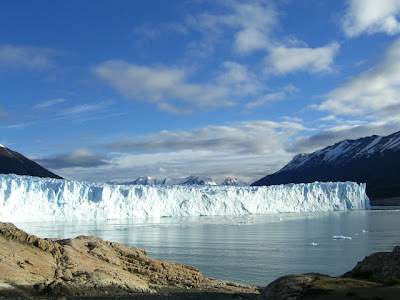 The level of the lake is only 165m above sea level. You have beech trees similar to the ones found in New Zealand. The Glacier is one of the few "stable" glaciers in the world, meaning that for the last 90 years it has been roughly the same size. 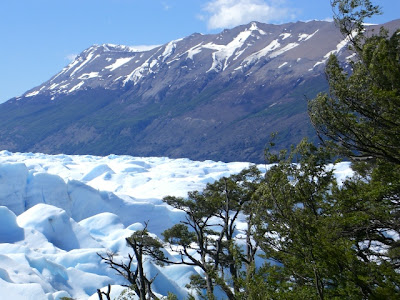 The photo below shows that the front of the glacier is currently pushing right up against the Peninsula of Magallanes. You can see the peninsula in the second photo (its at the end of the glacier at the right of the photo). When the glacier is touching, the southern arm of the lake is completely closed and cannot drain to the atlantic. The water level starts to rise over the months until you get whats called the "Rupture". When the pressure gets so great the water forces its way through. This has happened almost 20 times in the last 90years. 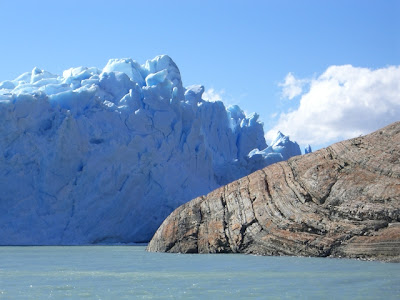 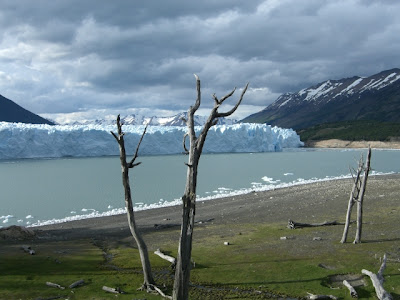